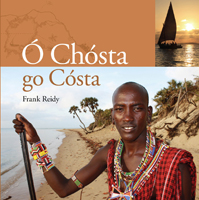 ClubLeabhar.com - Book of the Month, November 2010

In 1994 the army officer, Frank Reidy was sent to eastern Africa to assist the United Nations effort that was assembled to deal with the humanitarian crisis caused by genocide in Rwanda. In this book the author returns to eastern Africa, hoping to see another side of the continent. Images of Africa that are not so common in Western media, often focused on stories of famine, war, political fraud, and constant hardship.

The author sails around the Kenyan coast in a traditional dhow, visits Barack Obama’s grandmother, and learns about the country’s complicated and tragic history. He goes on safari in the Maasai Mara national park. He visits Uganda to see how Irish Governmental aid has helped that country. And he returns to Rwanda to see how they are progressing in the years following genocide.

This is a travel book, a history book, a source of information and a book of politics – it is a book that anyone with an interest in Africa will appreciate.