The travel book Seal sa Pholainn by Alan Desmond is the book of the month for June on ClubLeabhar.com. 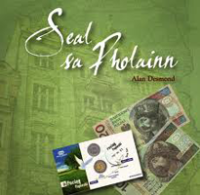 In 2003 Alan Desmond headed for Poland. He had a year contract to teach Irish in the Catholic University of Lublin, in the east of the country. Little did he think at the time that he’d stay there for four years.

As well as giving a lively, simply written account of the various places that he visited, the book gives a sympathetic insight into the Polish community, their loyalty to the Catholic religion, their sympathy with the Polish Pope, John Paul II, and their religious practices and festivals.

There’s also a description of the injustice suffered by Poland during and after the second world war and the changes undergone by the country since the end of the communist regime and the accession of Poland to a Member State of the European Union.

With more than 200,000 Poles in Ireland at the moment, most Irish people are in contact with members of the Polish community from time to time.

This book is of great assistance in gaining a better understanding of them.